“Transcending the divide between land and sea, I landed at the foot of mountains. I thought I heard you singing, in the most silent summer dawn.
Like a soft, whispering breeze, swirling through clouds, your voice got into my head, and left me speechless.
”
—Back of Cangqiong's box

Cangqiong (Simplified Chinese: 苍穹; Traditional Chinese: 蒼穹) is a Mandarin Chinese vocal developed and distributed by Beijing Photek S&T Development Co., Ltd., and was released in July 2019 for the first Synthesizer V engine. She is part of the MEDIUM⁵ cast.

Her voice provider is Kinoko Mogu, a Chinese singer and music producer.

For Cangqiong's logo, a shape known as the octahedron is present next to her name and is part of the sixth stroke in the "苍" character. In the spiritual meaning of Metatron's Cube, the octahedron represents air, which influenced her design, name, and concept.[5]

In March 2019, Cangqiong was revealed to be part of the MEDIUM⁵ cast and was one of the girls who derived from a single being known as ZERO who possessed Metatron's Cube.[6] She is listed as a Taurus.[7]

According to the Dreamtonics website, Cangqiong is said to value logic even though she is willing to look the other way. No matter what she might say, she makes sure to never sound harsh. Her kindness permeates from her calm soothing voice.[8]

Cangqiong has a butterfly motif for her design. 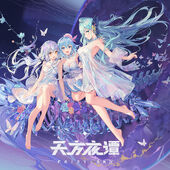 Cangqiong was initially introduced as Xingchen's eldest sister and her UTAU voicebank was showcased in February 2019. Throughout her time as an UTAU, Cangqiong received various merchandise, though not nearly as much as Haiyi given that she was revealed nearly a year later. This included key-chains, phone straps, omamori, and an original album: "Fairyland".

Cangqiong was later introduced as one of the members of MEDIUM⁵ and her Synthesizer V voice database released in July 2019. Since then, her UTAU vocal was no longer used, though it was possible that PVs using this vocal could appear later on. However, it was also likely that the UTAU vocal may be replaced with or a succeeding version may be created using the Synthesizer V versions. Additional official merchandise, such as figures and albums featuring her Synthesizer V voice databases, continued to surface. Cangqiong also had her own official Weibo account and official bilibili playlist.

Cangqiong's character status
Reaction
Cangqiong was well-received within the Chinese fanbase. As a Synthesizer V character from Beijing Photek and as VOCALOID Xingchen's sister, she was considered to be highly anticipated.
Impact

As the second sister related to Xingchen to be revealed, Cangqiong quickly received attention from existing Quadimension fans. Her relations to Xingchen and Haiyi during her time as an UTAU also helped with her popularity as they were marketed together in merchandise and albums. However, because she was revealed nearly a year after Haiyi and only released as a Synthesizer V about five months later since her own UTAU debut, Cangqiong did not have nearly as much as Haiyi did in merchandise and albums for that engine.

As a mature vocalist, her voice type was unique as there were not many mature female Chinese vocals, especially within commercially-released engines. As an UTAU (and later Synthesizer V) vocal, she is considered to be a very notable vocalist for her voice type. Though she has a calm and soothing type of voice, producers found ways to experiment with her vocals. In some examples, her voice could become strong, powerful, and versatile, excelling in a variety of genres, Gufeng especially.

Cangqiong's Synthesizer V bank was released on Beijing Photek's Taobao page, making it difficult for overseas users to purchase her if they did not know how to navigate and use the site. For her Synthesizer V Studio voice database, she was made available on Animen's ANiCUTE shop, which was friendlier to use for overseas fans.

The first original song to reach 1 million views featuring Cangqiong's voice was "Liúnián Rú Gē" by Ximen Zhen and Nalanxunfeng, which occurred on February 3, 2020. She, like her sister Chiyu, continued to receive more originals to reach this number of views over time.
Achievements