“The moment I stretch my wings, cataclysm follows; Praying to god turns fruitless and my glory falls to ashes.
The wings of Phoenix, scorch all things. Hear my roar, echoing and ever-lasting.
”
—Back of Chiyu's box, taken from her demo "Wing of Phoenix"

Chiyu (赤羽) is a Mandarin Chinese vocal developed and distributed by Beijing Photek S&T Development Co., Ltd., and was released in April 2019 for the first Synthesizer V engine. She is part of the MEDIUM⁵ cast.

A shape known as the tetrahedron appears on Chiyu's logo. It is present in the second stroke of the "赤" character in her name. In the spiritual meaning of Metatron's Cube, the tetrahedron represents fire, which influenced her design, name, and concept.[5]

In March 2019, Chiyu was revealed to be part of the MEDIUM⁵ cast and was one of the girls who derived from a single being known as ZERO who possessed Metatron's Cube.[6] She is listed as a Sagittarius.

According to the Dreamtonics website, Chiyu is described as a brave and honest girl.[7]

The red feathers on Chiyu's design symbolize the phoenix.

Chiyu was initially introduced as Xingchen's second older sister, but did not make her debut until April 19, 2019. Since then, she was marketed as a member of MEDIUM⁵ and had a variety of merchandise which included but was not limited to: charms, dakimakura, albums, standees, figures, and more. Chiyu also had her own official Weibo account and official bilibili playlist. 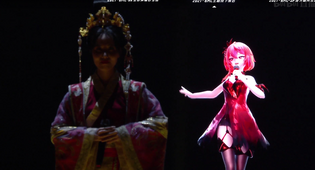 Chiyu's character status
Reaction
Chiyu was well-received within the Chinese fan-base. As the first Synthesizer V character from Beijing Photek and as VOCALOID Xingchen's sister, she was considered to be highly anticipated.
Impact

As a MEDIUM⁵ character and the first sister related to Xingchen to release, Chiyu quickly received attention from existing Quadimension fans, especially after being revealed last among the sisters. After release, Chiyu was used in a variety of genres as producers experimented with her voice database. With a powerful, yet versatile voice, she excelled especially in rock and Gufeng genres.

Chiyu's Synthesizer V bank was released on Beijing Photek's Taobao page, making it difficult for overseas users to purchase her if they did not know how to navigate and use the site. For her Synthesizer V Studio voice database, she was made available on Animen's ANiCUTE shop, which was friendlier to use for overseas fans. In addition, she is currently the only Beijing Photek vocal to receive a Standard Lite voice database, allowing producers to trial her using this free-to-use voice library and making her even more accessible compared to the other vocals from the same company.

On November 25, 2019, Chiyu was the first Synthesizer V character to reach 1 million views on an original song: "Tiānxià Jú" by Chen Yiming, KBShinya, and Luo Qihuai. Afterward, she continued to receive more originals to reach this number of views over time. She was also the first to perform live, making her stage debut in July 2021.
Achievements