Edit
This project is currently in production.

According to official sources, this project was announced to currently be in production or is in its conceptual stages.
Please read the page for more information.

Chifuyu is expected to release around October 2022.

She is voiced by Kaya Okuno, a Japanese voice actress.

Hanakuma Chifuyu is a first-year student attending the fictional Otaru Shiokaze High School. She can play the drums and is noted to have "serious withdrawal thoughts". She decided to enroll and join the music club after seeing Natsuki Karin performing live. She is described to be addicted to taking photos with an old camera she found in her warehouse.

Chifuyu likes matcha, reading, and cameras. She dislikes sweetness in general.[1] She is themed around the winter season.[2]

Hanakuma (花隈) is an existing Japanese surname while Chifuyu (千冬) translates to "a thousand winters".

Chifuyu is a high school student with long black hair tied into braids extending past her shoulder and small white bows tied to the tips of the braids. Her eye color is a pale green and she wears a pair of black glasses, although she also wears contact lenses sometimes.[3]

Chifuyu wears a standard school uniform - a grey top with a green tie and a dark blue/white accented long sleeved jacket over it. She also wears a short, dark blue pleated skirt, black leggings with a pair of black and white-striped socks, and grey calf-length boots. 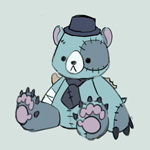 Larkpatch (ラークパッチ Raakupacchi), her companion who was also called Professor Larkpatch (ラークパッチ教授 Raakupacchi-Kyouju or ブロフェッサー、ラークパッチ Purofessaa Raakupacchi), is a light blue stuffed bear with black claws and dark blue patches over his left eye, arms and legs. He wears a dark blue tie and has a small top hat on his head. He has a white bandage on his right arm and has a pair of tattered yellow wings on his back. His name "Larkpatch" is inspired by Doctor William Smith Clark, an American professor of chemistry, botany and zoology and a colonel during the American Civil War and the word "patch" in reference to the patches on his body.[4]

On May 20, 2021, a silhouette was shown on TOKYO6 ENTERTAINMENT's twitter account. Details were to be released on May 22.[5] This was later revealed to be Hanakuma Chifuyu, a character introduced through a campaign titled "Koharu Rikka x Otaru Collaboration (小春六花×小樽コラボ)". She was confirmed to be a student enrolled at the fictional Otaru Shiokaze High School and was in the same music club as Koharu Rikka.[6][7] Details about Chifuyu as a character were released and she was confirmed to be voiced by Kaya Okuno for a promotional video.[8][9] She was illustrated by Teshima Nari and the logo was created by Hiroaki Watanabe.[10] It was noted in a TOKYO6 ENTERTAINMENT livestream that there were plans to create a voice library for Chifuyu and Natsuki Karin, which were confirmed in June to be Synthesizer V AI and CeVIO AI after TOKYO6 ENTERTAINMENT adjusted their website.[11]

On August 8, due to some concerns regarding business activities related to Synthesizer V, Dreamtonics Co., Ltd. noted that Chifuyu was on the list of "yet-to-be-published" voices and initiatives.[12] For many overseas fans, this was the first time they became aware of these voice databases as there was no official announcement via social media nor newsletter of the productions and website adjustments. Due to language barriers, the livestream featuring the announcement was also overlooked.

On October 3, it was announced that Chifuyu would be the third character in the lineup, meaning that Karin was to be prioritized over her. A crowdfunding campaign for Chifuyu would be launched around June 2022 with details to release in the spring.[13]

On October 26, it was confirmed via livestream that recordings for a test Chifuyu bank had begun and would continue onto the next day. Samples were expected to be provided in the spring.[14]

On January 4, 2022, TOKYO6 confirmed that crowdfunding for her Synthesizer V AI voice database and CeVIO AI Talk Song library would start this year and that their production was planned to be finished before the year's end.[15]

On February 16, Chifuyu's official Twitter feed reconfirmed the crowdfund to take place in June, with aims to get both of her CeVIO AI and SynthV AI libraries released in October.[16] During the AHS live broadcast the next day (where TOKYO6 acknowledged their cooperation in the development of VOICEPEAK, AH-Software's new text-to-speech software based on Dreamtonics' Syllaflow AI speech-synthesis engine), her October release month was confirmed at least for her CeVIO AI Talk voice.[17]

On March 28, it was announced that Chifuyu's CeVIO AI and Synthesizer V AI production crowdfund was scheduled to launch on June 26. Details were to come in mid-May.[18]

On April 22, Chifuyu's official Twitter announced that "she" would be performing at "Koharu Rikka 1st LIVE! First Day of School!".[19] At the concert, Kaya Okuno performed "ヒメタルネ" ("Himetaru.NE")[20], a song written by Itsuki Minato, Takapira's keyboardist, that was intended to be a future demo for Chifuyu.[21][22] On May 2, TOKYO6 tweeted that a live broadcast was scheduled for May 20 at 19:30 JST with appearances from Yoshino Aoyama, Miyu Takagi, Kaya Okuno, and Akasako. Discussions about Rikka's birthday festivities, "Koharu Rikka 1st LIVE! First Day of School!", Karin's release commemoration, and Chifuyu's crowdfund outline for June 26 were to be expected.[23] Chifuyu's CeVIO AI Talk Voice and Synthesizer V AI voice database were confirmed to be showcased at the live broadcast.[24]

On May 20, during TOKYO6's livestream, Chifuyu's crowdfunding was announced to begin on June 26 at 9 PM JST during another broadcast and would be hosted on ubgoe. It was scheduled to end on July 26 at 23:59 JST. The first goal, at 6 million yen, included the confirmation of Chifuyu's CeVIO AI Talk Voice and Synthesizer V AI voice database. The second goal, at 8 million yen, included 800 PitaGoe samples. The third goal, at 10 million yen, included a 3D model and an additional demo. Afterwards, for each time 3 million yen was raised, another demo and standing visuals would be added.[25]

Product Information
Package details as noted:
Hanakuma Chifuyu is a feminine Japanese voice database with a soft and cute tone. As expected of an AI voice database, this enables her to sing with a more human-like and realistic voice.
Phonetic notes as noted:
Through cross-lingual singing synthesis, Chifuyu AI is able to sing in not only Japanese but also in English and Mandarin Chinese. This feature is only available in the Synthesizer V Studio Pro Editor.
License agreements as noted:
TOKYO6 ENTERTAINMENT's Character Usage Guidelines - Japanese

On May 22, 2021, Chifuyu received an official acrylic keychain.[26] A cocktail collaboration with Bar V, a bar in Susukino Sapporo, was also announced.[27] On May 24, three contests as part pf the Koharu Rikka x Otaru Collaboration were launched one of which was to name Chifuyu's and Karin's stuffed bear companions.[28] Finalists of the Otaru Collaboration radio FM, Mascot Name and Audio Drama contests were announced during the second TOKYO6 ENTERTAINMENT Official Live Broadcast on July 21. Twelve entries were submitted for the stuffed bear mascots for Karin and Chifuyu respectively. Of the winning entries, Larkpatch-Kyouju (ラークパッチ教授, lit. Professor Larkpatch or ブロフェッサー、ラークパッチ) was selected by Kaya Okuno, Chifuyu's voice actress, as the name for Hanakuma Chifuyu's mascot submitted by Twitter user Mamon;[29][30] this name would be later simplified to just Larkpatch (ラークパッチ) on Chifuyu's official character page.

On April 22, 2022, Kaya Okuno performed "ヒメタルネ" ("Himetaru.NE") at "Koharu Rikka 1st LIVE! First Day of School!".[31]. It was a song written by Itsuki Minato, Takapira's keyboardist, that was intended to be a future demo for Chifuyu.[32]

Hanakuma Chifuyu's character status
Reaction
Upon revelation of Koharu Rikka's companion characters, Hanakuma Chifuyu and Natsuki Karin were met with excitement as the second and third new characters of TOKYO6 ENTERTAINMENT's line. This led to anticipation and hope that the pair would receive voice databases in the future. In June 2021, their productions for CeVIO AI and Synthesizer V AI were officially confirmed via livestream, but as the video was available only in Japanese, the lack of announcement via social media, and no notification of a website update, many overseas fans did not become aware of the production until August that year. Regardless, fans were excited to know that the two would be joining Rikka as voice synthesizer characters.