Kotonoha Akane & Aoi (琴葉 茜 ・ 葵) are a pair of Japanese vocals developed and distributed by AH-Software Co. Ltd. in collaboration with AI, Inc., and were released as a single shared Standard voice database for Web Synthesizer V and Synthesizer V Studio in July 2020.[2] They originally debuted as VOICEROID+ speech voicebanks in April 2014 and later updated to VOICEROID2 in June 2017.

The Kotonohas are a pair of sisters, with Akane being the elder sister and Aoi the younger sister. Akane is described by Aoi as a "natural airhead", while Aoi has a gentle personality, but is more firm than Akane.[3][4] Because Akane lived in Kansai for a long time, she is used to speaking in the Kansai-ben dialect.

Their birthday is April 25, the same day they originally released as VOICEROIDs.

Kotonoha (琴葉) is derived from the words koto (琴, 13-string Japanese zither), no (の, Japanese possessive particle that in classical Japanese was often omitted in writing, especially when writing down full names of people from important clans) and ha (葉, leaf, plane, lobe, [pine] needle, blade [of grass], spear, fragment, piece). Literally, it can be translated to either "leaf of a koto" (if using the most common definition of 葉) or "fragment or piece of a koto". Thus, both Akane and Aoi can be considered to be two fragments of a metaphorical koto which when joined together complete the instrument (or, in this case, the voice library).

Akane (茜) refers to both Rubia argyi (Japanese madder, an east Asian flowering plant) and the red dye that is extracted from such flower. Aoi (葵) refers to a hollyhock flower like the one incorporated into the Tokugawa shogunate's official seal or mon (which was officially called 丸に三つ葉葵 Maruni Mitsuba Aoi); it also shares furigana with aoi (青い, "blue").

Kotonoha Akane and Aoi wear matching traditional-inspired thigh-length dresses embroidered with music notes along the front and their matching iconic string knots (reminiscent of Japanese Kichō knots 几帳結び) on their chests. They wear matching hair ribbons on opposite sides of their heads and thigh-high visualizer-inspired boots. Both girls have long waist-length hair and hime-style cut bangs. Akane's theme is pink and black while Aoi's is blue and white. 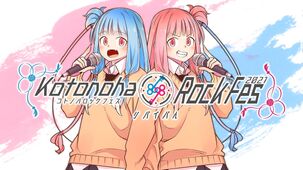 On February 27, 2021, Akane & Aoi appeared at a live concert performance titled Kotonoha Rock Fes 2021 (コトノハロックフェス2021) held by i-Pairs Inc. in celebration of the release of their Synthesizer V library.[11][12] The sisters performed live on stage as a projection on a screen with a live band performing various original and cover songs.[13]. The event started as a crowdfund with a goal of raising 3,400,000 yen.[14] Over 4,183,444 yen would eventually be raised prompting for the creation of exclusive MikuMikuDance models of the girls' Synthesizer V costumes.[15][16][17]