Minus, also known as Xingchen Minus (Simplified Chinese: 星尘Minus; Traditional Chinese: 星塵Minus) and Stardust Minus, is a Mandarin Chinese vocal developed and distributed by Beijing Photek S&T Development Co., Ltd., and was released as a Standard voice database for Synthesizer V Studio in September 2020. She is part of the MEDIUM⁵ cast.

Minus is expecting a Standard-trained AI voice database for Synthesizer V Studio known as "Xingchen Minus Synthesizer V Plus".[1]

For Minus's logo, a shape known as the dodecahedron is present next to her name and is part of the third stroke in the "星" character. In the spiritual meaning of Metatron's Cube, the dodecahedron represents ether.[2] Ether was noted to have been kept secret or treated as the secrets of the universe. It could be referred to as "the source of all things that arise in Space and Time" or "God's Spirit". This shape in general was what was believed that "surrounds Earth and the other four solids combined".[3]

Not much is known about Minus, but she has relations to the MEDIUM⁵ cast and potentially derived from a single being known as ZERO who possessed Metatron's Cube.[4][5] She is described as a villainous character according to Ddickky.[6]

Minus is also known as Xingchen Minus (星尘Minus; Xīngchén Minus) and Stardust Minus. Xingchen (星尘; Xīngchén), means "Stardust" in Chinese, and is taken from the VOCALOID Xingchen. "Stardust" is the official English name as it appears on the VOCALOID's boxart, numerous promotional material, and is utilized on the official social media accounts.

The whole concept for Minus is currently unknown, leaving no explanation for the "Minus" part of the name. 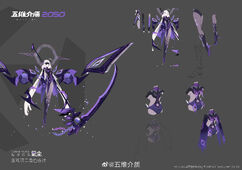 Minus bears a striking resemblance to Xingchen but is depicted to be a darker form, with most of her outfit consisting of black and purple. She wears what appears to be armor and a cape. Unlike the members of MEDIUM⁵, Minus debuted and released with what may be her design for the upcoming MEDIUM⁵ 2050 (五维介质2050) game while all of the other members have separate game concepts to their normal synthesizer design. She carries a scythe as a weapon.

In terms of physical characteristics, there are some other notable differences between Minus and Xingchen. Minus wears a dark visor that covers her eyes. It was later revealed in Napstina's concept art that she has purple eyes while Xingchen's are yellow or gold. In addition, while Minus wears a similar hairstyle as Xingchen's, her hair is much paler and is closer to white while Xingchen's is closer to periwinkle. The ends of her hair were styled as more of a straight-cut. In xiao Ye You Xi's game concept art, it was more apparent that Minus has very pale skin in comparison to Xingchen and the other MEDIUM⁵ characters. In this concept, she also has pale purple fingernail polish. 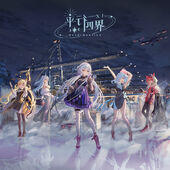 Minus was introduced as a mysterious girl who had relations to the MEDIUM⁵ cast and bears a striking resemblance to the VOCALOID Xingchen, though no thorough information about her was given. She would be making an appearance in the MEDIUM⁵ 2050 game, where she was noted to be more of a villainous character. Over time since her Synthesizer V Studio release, she was featured in official merchandise, such as posters, buttons, and albums.

On occasion, Beijing Photek would host tuning competitions[7] and paid music production courses for users to participate and attend. These would feature all of Beijing Photek's vocalists, including Minus.[8]

Like Muxin before her, Minus's voice database was only made available on Beijing Photek's Taobao shop, making it difficult for overseas users to purchase her if they had no knowledge of how to navigate and use the site. All of the previous vocals before her and Muxin were made available on Animen's ANiCUTE shop, which was friendlier to use for overseas fans.

The first original song to reach 1 million views featuring Minus's voice was "Jīng Què" by Ta Ku and Ran Yu You, which occurred on July 22, 2021.