Edit
This project is currently in production.

According to official sources, this project was announced to currently be in production or is in its conceptual stages.
Please read the page for more information.

ROSA (ロサ) is an upcoming Japanese vocal to be developed and distributed by ZAN-SHIN Co., Ltd., and is expected to release as an AI voice database for Synthesizer V Studio.[3][4] She was previously released as a CeVIO AI speech voicebank in December 2021.[5] There is an interest in the possibility of creating singing and speaking voice libraries in English for both engines.

Production of ROSA's Japanese CeVIO AI talk voicebank was prioritized over her Synthesizer V AI, which has not yet been funded nor started in development.

Her voice provider is Shirayuki, a Japanese influencer and voice actress. She was the chosen candidate from ROSA's audition.

ROSA's theme color is pink and she is the youngest sister of the VOCALOID CUL.[6] She is a cheerful and mischievous person.[7]

ROSA was born in the Shinobi No Sato Ninja Village (忍びの里) with her older sisters which was under constant threat by hostile forces[8] and as such, was separated from her sisters for a long period of time.[9] Unbeknownst to her, she was entrusted to an old little church on a small hill where she lived together with the nuns to keep her safe. ROSA, who was actually the heir to CUL, had her name changed so that her relationship with her sisters was unknown.[10] For much of her life, she had believed she was alone and often questioned who she was and what her purpose in life is. One day CUL appeared to her and told her that she was her older sister.[11]

"ROSA", a Spanish word, can mean "rose" (as in the flower), but was selected mainly for its relation to the color pink (which in languages like German and Spanish is also called rosa). 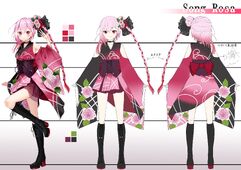 ROSA wears a robe similar to a traditional Japanese Kimono, consisting of a black and pink top and a short pleated maroon colored skirt. The sleeves are decorated with soft pink roses and a curly white pattern. Around her waist is a black Obi (traditional Japanese belt worn around the waist.) laced together in the front. A red bow is tied in the back. The skirt of her top is adorned with the same wavy pattern as the sleeves. Her shoes are tall black lace-up boots reaching her knee. The heels are a deep red. She wears a black choker with silver detailing. Her hair is cut at an angle, stylized in a high braid to one side of her head. The color is a cotton candy pink with a crimson intertwined in the braid. She has many hair accessories, such as a red bow, rose hair pins, and a black ribbon. ROSA has reddish-pink eyes, and rosy cheeks.

Throughout 2020, HirotoP composed tweets in regards to CUL and the many parts of her project. He revealed that REV was meant to become a VOCALOID, but his project fell through, and later revealed that CUL had conceptual sisters themed around the following colors: blue, white, yellow, and red (CUL being the red-themed sister). It was also confirmed that she had a twin sister known as BLACKCUL (Wet Crow). In response to a fan, HirotoP also expressed interest in updating CUL but did not give further details.[16]

On March 20, 2021, HirotoP confirmed that ROSA, CUL's younger 15-year-old sister with a pink theme, was in production for a new AI singing and talk synthesizer developed by ZAN-SHIN Co., Ltd.,[17] seeming to suggest that VOCALO Revolution was not producing vocals for the VOCALOID software.

It was mentioned that ROSA's voice actress would be chosen via an audition taking place in April.[18] HirotoP also discussed the time when Eri Kitamura recorded for CUL and noted that the voice direction for ROSA's actress would be treated the same.[19] He expressed an interest in creating ROSA's singing voice database for Synthesizer V or CeVIO AI and a speech voicebank for AI VOICE or CeVIO AI, but the final decision would not be announced until April.[20][21] In addition, due to an unexpectedly high interest from western fans, HirotoP was also considering possible English singing and speech voicebanks for ROSA.[22]

On March 26, ROSA's illustrator was selected and would be announced once her final artwork was ready.[23] On March 27, ROSA's singing voice database was confirmed to be developed for Synthesizer V. This was chosen due to the synthesizer's ease of use and ability to use VSQx files. In addition, it seemed that an AI voice was in consideration along with a standard voice database.[24]

On April 2, a recruitment post for users interested in creating songs and talk segments with ROSA was launched.[25] On April 3, HirotoP mentioned that the company was interested in collaborating with Internet Co., Ltd. in distributing ROSA since they distributed CUL's VOCALOID3 packages in 2011.[26]

ROSA's audition was launched on April 17. The illustration was confirmed to be released soon.[27] Details and scheduling for the audition were noted on ZAN-SHIN Co., Ltd.'s official website for ROSA.[28] A preview of ROSA's face was shown on April 20.[29][30] On April 28, results of the first screening for the audition were revealed to be China Kitahara, Shirayuki, Juudenki, Minori Ninomiya, and Yuka Hiyamizu.[31][32][33] ROSA's lineart for both Synthesizer V and CeVIO AI were revealed on May 1 and the colored sketches (rough illustrations) were released on May 4.[34][35]

The start date for the crowdfund campaign was later changed to June 3 and procedures for overseas investors were being worked upon but was confirmed that this may be delayed.[42] The goal was set to 7 million yen.[43] The crowdfund for ROSA's CeVIO AI Talk voicebank began on June 3 with six tiers for Japanese supporters and three tiers for overseas supporters. A sample of Shirayuki voice-acting as ROSA was made available in the campaign to give supporters an idea of what ROSA may sound like prior to creating her voicebank.[44] The CeVIO AI voicebank was fully funded on June 30, with only a few hours before the campaign's end, resulting in being 112% funded.[45] Test recordings of the voicebank began on July 22, with ZAN-SHIN fully focusing on the production of the CeVIO AI Talk voicebank at this point in time.[46]

On November 24, HirotoP created a demo song for Tsuina-chan's AI voice database. In a reply to the demo post, ROSA's official account noted that it may take some time before she would be able to talk to her and Koharu Rikka, then asked if they could sing together next year.[47] When her CeVIO AI Talk Voice was announced to be releasing on December 17, ROSA's Twitter shared transparent versions of her CeVIO and Synthesizer V key artwork. On the Synthesizer V version's post, it was noted that ZAN-SHIN planned to have it created in 2022.[48]