SOLARIA is an English vocal developed and distributed by Eclipsed Sounds, LLC, and released as an AI voice database for Synthesizer V Studio in January 2022.

SOLARIA is themed to be like a sun goddess. Her age and height are open for interpretation, though she is considered an adult and the company itself considers her to be above average height for women.[1] Her overall character information is left for users to decide.[2]

Her concept derived from the "Eclipse" theme based on the company's name. Taking the voice provider's vocals into account, she became based on the sun.[3]

According to the crowdfunding page, SOLARIA's design was noted to be mature and powerful.

SOLARIA is regarded as female but Eclipsed Sounds encourages people to make their own decisions in regards to her gender, noting her to be more like a canvas for users to depict her in any way they would like. This also includes her race.[4]

SOLARIA's former name, "SOLARIS", was a name of Latin origins meaning "of the sun".

SOLARIA’s design is based on the concept of a sun goddess. She wears a crimson dress, with a sweetheart neckline detailed with gold. The hem of the dress is adorned with a gold thread pattern. Underneath her dress, she wears black tights. Around her waist is a gold belt buckled in the front with a ruby. She wears a gold shoulder plate, and cuffs. A cape of a bright yellow hangs on her back, the color fading into a burnt orange. Upon her golden head sits a pointy gold tiara. Her hair is a dirty blonde at the roots, and a pale yellow at the tips. Her eyes are the color of ambers. She has a constellation like pattern on her cheeks. Her shoes are golden pumps. She accessorizes with a gold necklace and ankle bracelet. A dust of bright colors surround her hands.

In the full artwork, SOLARIA was confirmed to be standing on a sundial.[4]

During the crowdfund period, an illustration contest was launched and slated to end on June 26, 2021, giving participants a chance to win a digital copy of the Synthesizer V Pro editor.[6] The winner was announced to be Nyś (@Nixie_Blue)[7]. 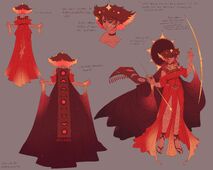 Following the events of the crowdfund, a second contest for designing an alternate design for SOLARIA was announced, where the winning design would become part of official content and illustrated by the key artist, Superstellar, herself. The theme of the contest was "SOLARIA: Eclipsed Design."[8] The winner was announced to be static (@staticcoceans).[9]

When asked as to why SOLARIA has a character image to represent her, Eclipsed Sounds answered that having a character to represent vocals was considered a tradition within the vocal synthesis community. They also noted that having an associated image of a person made it clearer that the software is a virtual singer, giving an idea of what the voice may sound like before listening.[10]

On March 5, 2022, an original song contest was announced to be launching, which would coincide with the release of SOLARIA Lite later in the month. While full details were yet to be provided, it was noted that entries must prominently use SOLARIA with no other virtual singer voices present. Human duet partners were allowed. Participants would be required to submit a link to their uploaded song and the .SVP file to the Eclipsed Sounds website before the end of the entry period.[11]

On March 26, 2022, the song contest started, and submissions are set to close on June 24 (total of 90 days). Along with it, SOLARIA Lite was released for those who wanted to enter the contest, but did not own the full SOLARIA database. The first prize winner would win $300 USD via PayPal, the crowdfund exclusive merchandise (including the physical copy signed by Emma Rowley), and an optional offer to collaborate with Eclipsed Sounds to make a new video for the winning entry. The second prize was $100 USD and a physical copy of SOLARIA, third prize was $50 USD and a physical copy of SOLARIA, fourth price was a digital copy of SOLARIA, and the fifth prize was a pack of crowdfund merchandise (acrylic stand, keychains, and buttons).[12]

SOLARIA's character status
Reaction
Upon revelation of SOLARIA's (then known as SOLARIS) project and a sample of her test library in May 2021, she was met with excitement. At the time, the only English voice database released was Eleanor Forte (released in 2018), who was to be followed by Tsurumaki Maki, the first English Synthesizer V vocalist available for both Standard and AI, in June 2021. As the third introduced and the first to be showcased by a western company, SOLARIA's debut left a positive impression among fans. After a successful crowdfund, SOLARIA was set for production. During this process, SOLARIA became one of four upcoming English vocals (which included Eleanor Forte AI, ANRI, and Kevin). This further excited Western fans as there were more English vocals to choose from after three years of only having one available since Synthesizer V's release in 2018 (that being Eleanor), filling in a demand for more in this language. SOLARIA's AI voice database was shown in December and fans noted that she had a strong voice, welcoming this trait within the English and overall AI roster.
Impact

SOLARIA's production was made possible through a successful crowdfunding campaign that was launched from May to June 2021, with the final total confirmed to be 120% and the number of backers being 396.[13] On March 5, 2022, Eclipsed Sounds commented that there was much support for SOLARIA since her release and that they were busy fulfilling digital orders and answering customer inquiries.[14] They also thanked everyone who believed in the SOLARIA project and helped make her into a reality, as well as those who supported her in post release. They noted that the support and enthusiasm was more than they could have expected.[15]

One of the demo songs, "Aura" by GHOST, became the first song featuring SOLARIA to reach 1 million views, which occurred on February 23, 2022.
Achievements