Tsuina-chan (ついなちゃん), also known as Kisaragi Tsuina (如月ついな), is a Japanese vocal developed and distributed by AH-Software Co. Ltd. in collaboration with Tsuina, the Ogre Hunter Project, and released with Standard and AI voice databases for Synthesizer V Studio in November 2021.[2][3] She was originally released as a VOICEROID2 product in November 2019.

Tsuina-chan originates from a popular "meme" character in the online Japanese anime community - Hinomoto Oniko. Oniko was created by denizens of 2chan in order to combat a particular Chinese ethnic slur against Japanese people by using that term and making it into a "cute anime girl." By doing so, they would "embrace" said term and make it useless as an insult.

She is the first VOICEROID to have both standard and Kansai-ben dialects, the second of which is due to a stretch goal for her crowdfunding campaign having been reached. Previously, this was achievable with Kotonoha Akane & Aoi, but as two separate characters.

Tsuina-chan resulted from a member of the "Hinomoto Oniko Project," Saki Oohenri, wanting to create a "rival" character to Oniko - as Oniko is an ogre, Tsuina-chan was conceptualized as an ogre hunter. Tsuina-chan made her official online debut on Oohenri's pixiv on February 3, 2011 (the initial upload was since deleted). Her character was inspired by the "Tsuina" Event, which is an annual ceremony performed on December 30 each year. It is a ceremony designed to exorcise ogres and bad spirits, which was the basis of Tsuina-chan's character. Elements of the ceremony (instruments, wooden masks, traditional clothing) were all part of her character design.

In November 2021, Tsuina-chan had an update to her website and more details about her character were given. Her blood type is "O-ni".

Kisaragi (如月) is an outdated term referring to the second month of the year, known as February. Tsuina-chan's original online debut was February 3, which is also her character birthday.

Tsuina-chan is a petite fourteen-year-old girl with long pale pink twindrills. A curly ahoge sits atop her head. Her oni barrette is made to look like Dickson, her ogre mask. Tsuina-chan has bright yellowish-brown eyes. For her Simple (also known as Diva) outfit, she wears a black and red sleeveless shirt with a white sailor collar tied with a red kerchief. The front of her top is lined with gold buttons. Around her waist is a white obi tied to the side with a pink obijime. She wears black detached sleeves with a red feathery fringe. Her skirt is short and black. The pleats in the skirt are a crimson color. Two blush-colored bars glow on the skirt’s hem. She has two different sock lengths: the right being a knee-sock, and the left being an over-the-knee sock. Her Zori are black with pink straps.

In her Standard design, the outfit is nearly identical to her Diva design except for the addition of detached black and red sleeves, that begin thin from the top, then greatly widen at the end. There is also a sheer pink fringe at the hem of her skirt. In her AI design, the obijime and zori straps are red and she wears an orange karaginu instead of the detachable sleeves. 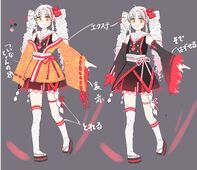 On September 14, 2020, Tsuina-chan launched a contest for fans to design an outfit for if she were to become a singing synthesizer.[19] The contest was set to last until November 14. On December 6, the results of the design contest were revealed with the winning design concept illustrated by Twitter user ゆゆのすけ (@51714_yuriyuri).[20] Runner-ups were also announced for various awards including the: AHS Excellence Award[21], Mai Kadowaki Excellence Award[22], Feeling of Dynamism Award[23], Lovely Poster Award[24], Kouhaku Maruko Kobayashi Award[25], Tsuina-chan Meme Material Contest Award[26], and the Koufudaiji Temple Award[27].

On June 24, 2022, Dreamtonics Co., Ltd. announced its first creation contest in collaboration with AH-Software, Animen, AUDIOLOGIE Co., Ltd., and Eclipsed Sounds, LLC with three competition areas: originals, covers, and cross-lingual synthesis. Creators were encouraged to submit their work regardless of language restrictions. Prizes included cash distribution from bilibili, digital copies of certain Synthesizer V voice databases, and the physical boxed copy of ANRI. Tsuina-chan was listed as one of the eligible vocals for this contest.[30]

Tsuina-chan's character status
Impact
Tsuina-chan's Synthesizer V production was made possible through a successful crowdfunding campaign that was launched from December 2020 to January 2021. She reached the required development stretch goal by December 26 and managed to accumulate a total of 15,032,217 yen by the end with 725 backers, reaching 300%.[31]
Achievements